The research is performed within the  project Pseudomagnetic forces and fields for atoms and photons, funded by the Unity through Knowledge Fund (UKF).

We aims to discover novel schemes for creating pseudo-magnetic fields (also referred to as synthetic magnetic fields) for atoms and photons, and to provide experimental demonstrations of some magnetic effects such as the Lorentz force via these schemes. The targeted systems are ultracold atomic gases (experimental and theoretical effort), and propagating laser beams in photonic structures (theoretical effort, experiments could follow up this project).

The most significant results:

In a recent paper published in Scientific Reports ( http://www.nature.com/articles/srep13485 ), Neven Šantić, Tena Dubček, Damir Aumiler, Hrvoje Buljan and Ticijana Ban experimentally prepared conditions using cold atoms and lasers where atoms, which are neutral particles, will behave like charges in magnetic fields. Charged particles in magnetic fields experience the Lorentz force which bends their trajectory, because the force is orthogonal to their velocity. In a recent experiment, researchers from Zagreb have created synthetic Lorentz force acting on neutral atomic particles. The research is on interest for creating table-top emulators of complex interacting systems. The experiment was led by Ticijana Ban from the Institute of Physics, and the theory was led by Hrvoje Buljan from the Department of Physics, Faculty of Science, University of Zagreb (UniZG). 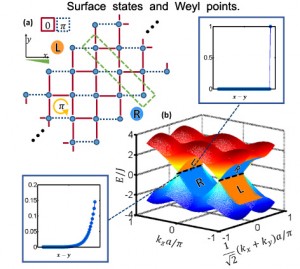 We show that Hamiltonians with Weyl points can be realized for ultracold atoms using laser-assisted tunneling in three-dimensional optical lattices. Weyl points are synthetic magnetic monopoles that exhibit a robust, three-dimensional linear dispersion. They are associated with many interesting topological states of matter, such as Weyl semimetals and chiral Weyl fermions. However, Weyl points have yet to be experimentally observed in any system. We show that this elusive goal is well-within experimental reach with an extension of the techniques recently used to obtain the Harper Hamiltonian.

We theoretically predict synthetic Lorentz force for classical (cold) atomic gases, which is based on the Doppler effect and radiation pressure. A fairly spatially uniform and strong force can be constructed for gases in macroscopic volumes of several cubic millimeters and more. This opens the possibility to mimic classical charged gases in magnetic fields in cold-atom experiments.