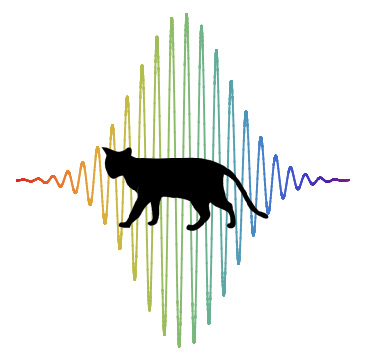 Our aim is is to explore novel phenomena that arise when the mechanical action on cold atoms is induced by frequency comb (FC) excitation.

July 2019.
The experiment is assembled in a new lab space. The first MOT is observed and cold rubidium cloud is characterized. Thanks to Danijel, Domagoj and Mateo for their hard work.

June 2019.
Our paper on the electromagnetically induced transparency with a single frequency comb mode probe is now in JOSA B.
Ivor Krešić, Mateo Kruljac, Ticijana Ban, and Damir Aumiler, JOSA B 36, 1758 (2019). 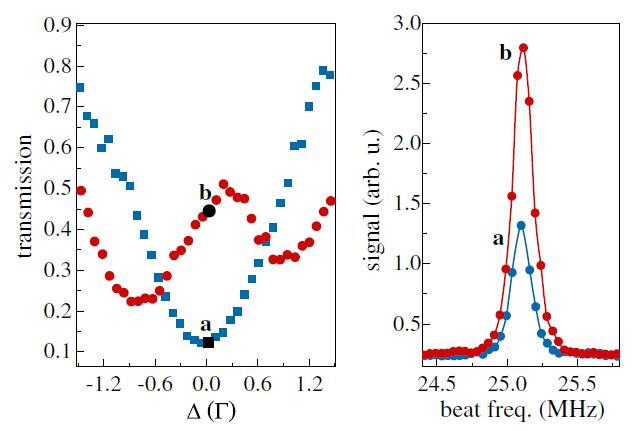 We have measured the electromagnetically induced transparency (EIT) of a single-frequency comb mode interacting with laser-cooled 87Rb atoms. A Λ hyperfine level structure in a D2 transition is used in the configuration of co-propagated probe (frequency comb) and coupling (continuous-wave) laser fields. The signature of EIT in the transmission of a single comb mode as well as the radiation pressure force is experimentally detected. The results are satisfactorily reproduced by the developed theoretical models, where EIT is seen to occur due to coherent accumulation. Our results could find application in quantum computing and communication with optical frequency combs.

May 2019.
Due to the implementation of the CALT project we move the cold lab to a new lab space located in another wing of the institute. It was pretty easy to disassemble everything.

May 2019.
Ivor Krešić, our postdoc, together with collaborators from United Kingdom, Austria and France published work on the inversion-symmetry breaking in spin patterns by a weak magnetic field.  The work is published in PRA.
I. Krešić, G. R. M. Robb, G. Labeyrie, R. Kaiser, and T. Ackemann, PRA 99, 053851 (2019). 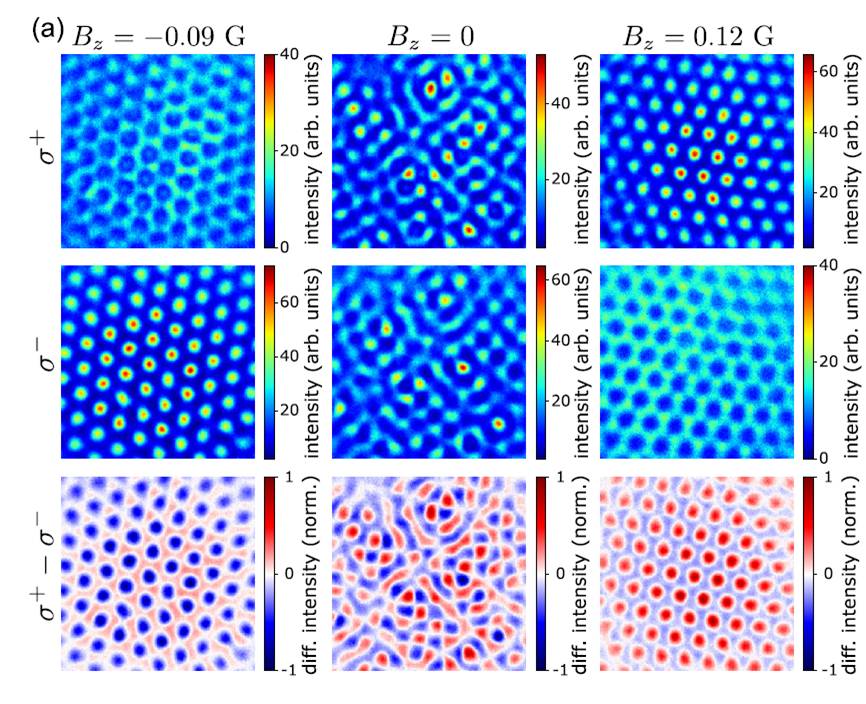 Laser-driven cold atoms near a plane retroreflecting mirror exhibit self-organization above a pump threshold. The authors analyze the properties of self-organized spin patterns in the ground state of cold rubidium atoms. They demonstrate how the experimental system can be modeled as spin-1 atoms diffractively coupled by the light reflected by the mirror. The roles of both dipolar and quadrupolar magnetization components in determining the threshold and symmetry variations with a weak longitudinal magnetic field are examined. Although the magnetic structures correspond dominantly to a lattice of magnetic dipoles, the symmetry breaking to ferrimagnetic structures in a finite field is mediated by the coupling to a homogenous quadrupole (alignment), which is not possible in a spin-1/2 system.

April 2019. Damir Aumiler, our collaborator, partook in a TV report on the recent paper of our group published in Scientific Reports. A report was broadcast as a part of a show “Znanstveni krugovi” on the national television. 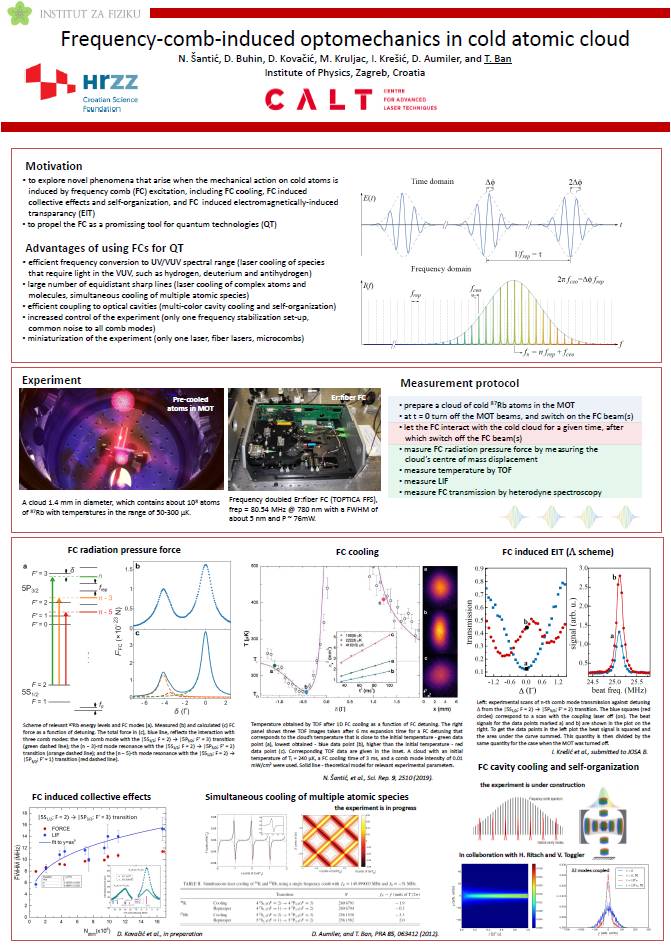 February 2019.
Neven Šantić, our former PhD student, is the winner of the Marie Curie Individual Fellowship. Neven joined the group of Prof. Immanuel Bloch at the Max Planck Institute of Quantum Optics in Garching where he will work in the field of quantum simulators with cold strontium atoms. Congratulations Neven! 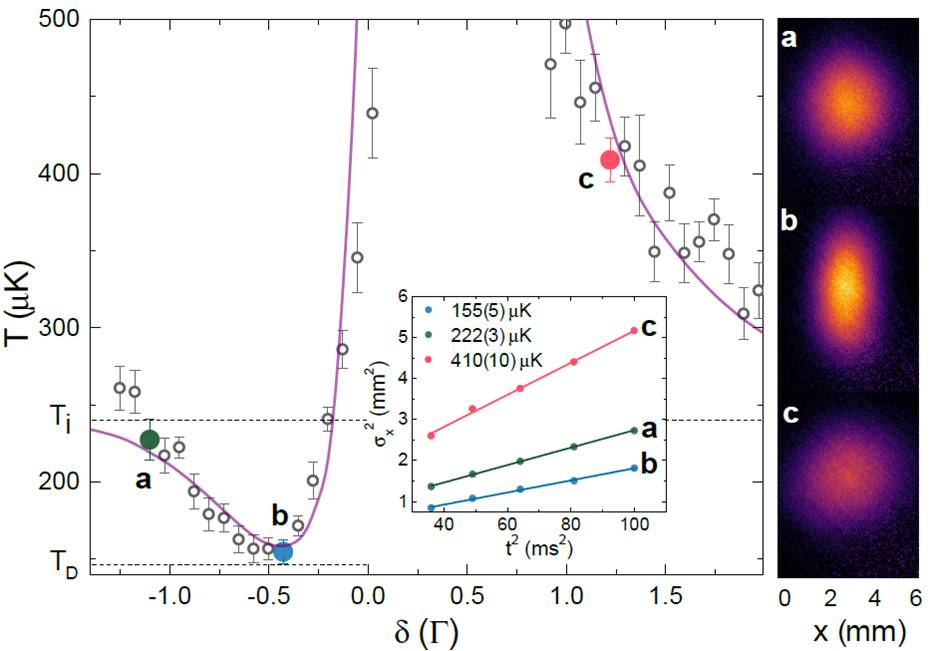 Our cold atomic gases research team studied cooling of the rubidium atoms by an unconventional method based on the use of femtosecond frequency comb. Proposed method  could enable cooling of atoms with strong transitions in UV spectral range which cannot be cooled by laser due to shortage of continuous-wave laser light sources. This group of elements includes hydrogen, antihydrogen, deuterium and some atoms important for study of biological systems, like oxygen and carbon. Cooling of hydrogen, antihydrogen and deuterium would enable more precise measurements of basic physical constants, more accurate optical clocks, rigorous tests of CPT symmetry and creation of quantum degeneration of new types of atoms. Cooling of atoms important for biological systems would enable better understanding of chemical processes on molecular level.

December 2018. Our paper on cooling of atoms using an optical frequency comb has been accepted for publication in Scientific Reports.

November 2018.
Ivor Krešić, our postdoc, is the winner of the Scholarship of the Scholarship Foundation of the Republic of Austria. Ivor will spend 8 months in the group of Prof. Stefan Rotter at the Vienna University of Technology, Institut für Theoretische Physik , and will work on the theory of the intensity waves in disordered media. Congratulations Ivor!

October 2018. Damir Aumiler, Danijel Buhin and Mateo Kruljac participated in the 11th meeting of Croatian physics society in Beli Manastir, Croatia. D. Aumiler had talk about Center for Advanced Laser Techniques, CALT. D. Buhin had a poster presentation about his recent work on laser cooling with frequency comb while M. Kruljac had poster presentation about his work on coherent effects in a cold atomis gas.

October 2018. Ticijana Ban and Ivor Krešić participated in the Workshop on Modern Aspects of Quantum Physics in Zagreb, Croatia. T. Ban participated as an invited speaker and she gave a talk “Cooling of atoms using  an optical frequency comb” about the recent work in the lab, and I. Krešić gave talk about his work on “Spontaneous light-mediated magnetism of cold atoms in the transverse plane”. 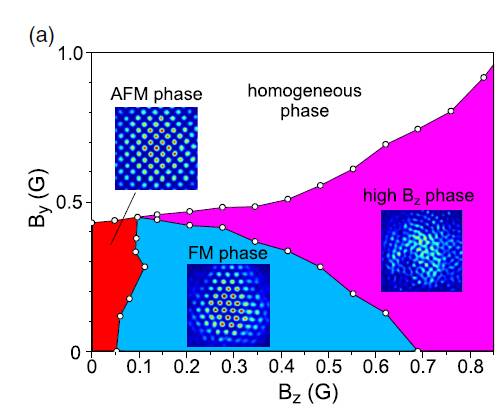 Septemberer 2018. Ivor Krešić, our postdoc, together with collaborators from United Kingdom and France published work on thr light-mediated spin structuring in cold atoms. The work is published in Optica.

The self-organization of a cold atoms in a 2D structures achieved when applying a red-detuned retroreflected laser beam to a large cloud of cold atoms is investigated in the conditions of weak magnetic field. Spontaneous structures in optically induced ground state coherences representing magnetic quadrupoles are demonstrated.  The results illustrate the wealth of behavior exhibited by laser-driven atomic media with complex level structure
under optical feedback.

September 2018. Danijel Buhin, Domagoj Kovačić and Mateo Kruljac participated on the Frontiers of Matter Wave optics summer school and conference in Crete, Greece. They won the grant from the organizers that covered their expenses. Scope of the school and the conference was atom interferometry, quantum technologies and sensors. D. Buhin presented recent work on the Frequency comb cooling, D. Kovačić on the supercontinuum generation and usage of FC as an optical ruler and M. Kruljac on his work on the coherent effects in a cold atomic gas. They visited the Institute of electronic strucure and laser, FORTH. During this visit they participated on the “Intellectual properties rights” lecture. 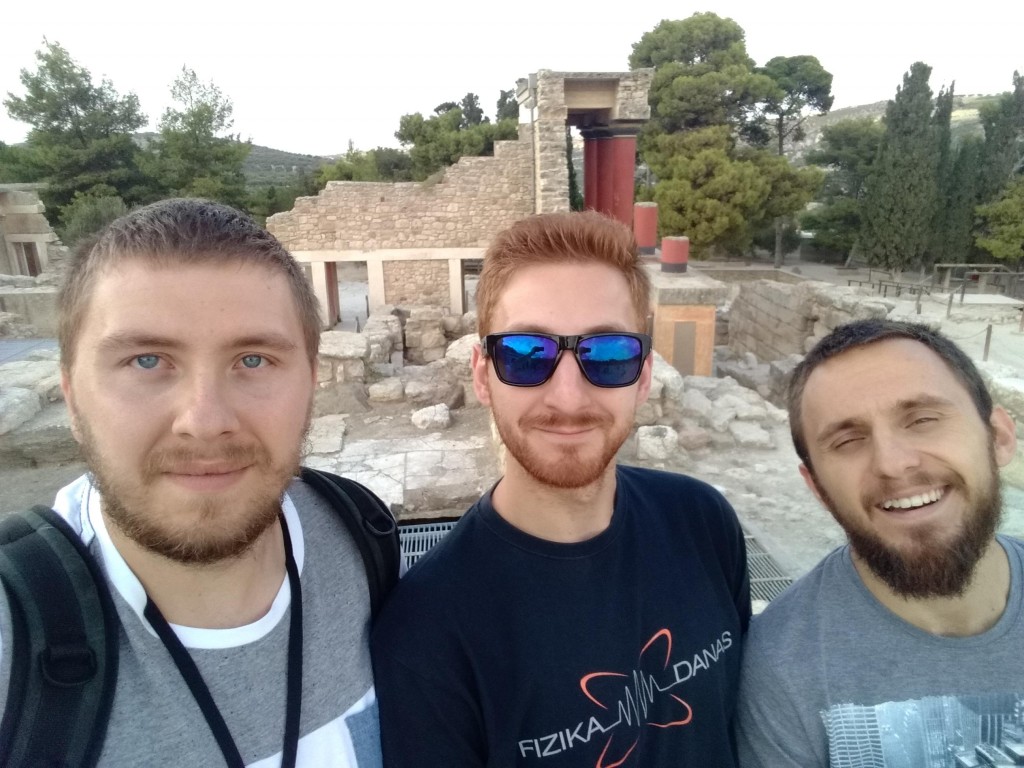 July 2018. Ticijana Ban participated in the 26th International Conference on Atomic Physics, ICAP 2018 in Barcelona, Spain. She presented our work on the Frequency comb cooling in a poster presentation. 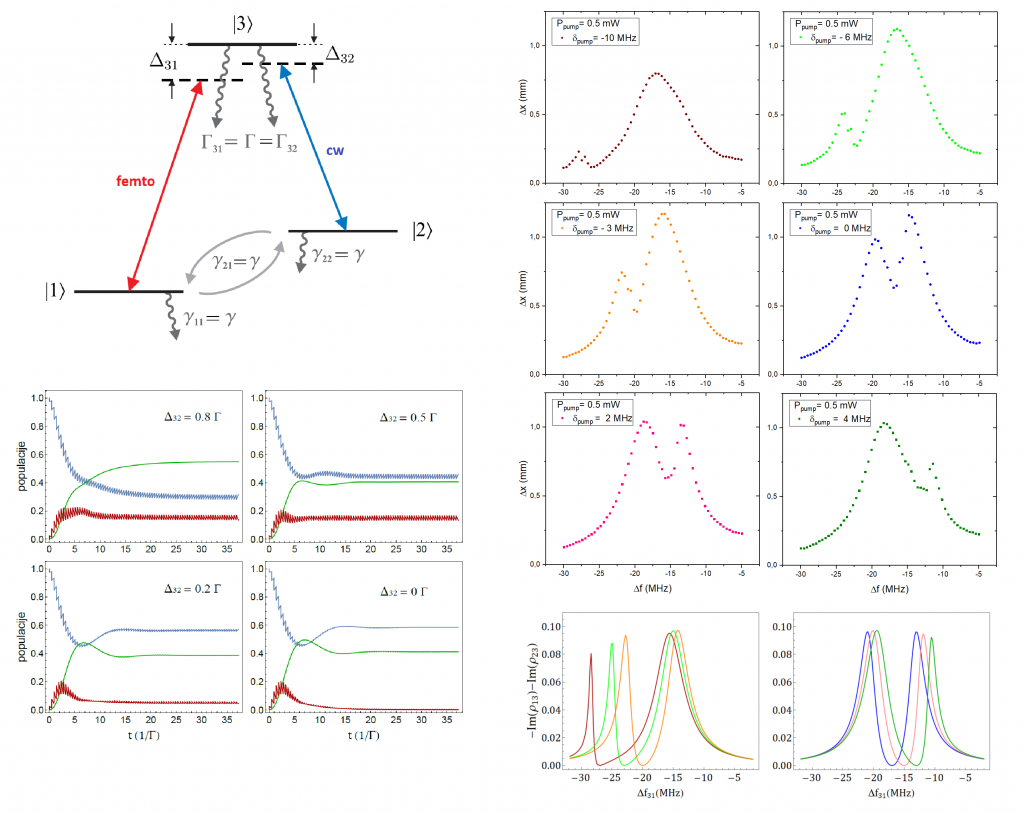 June 2018. Danijel Buhin participated in 24th Young Atom Opticians conference hosted by the University of Strathclyde in Glasgow, Scotland. He presented work on the CW laser cooling in the low intensity regime in a poster presentation.

March 2018. We started to build an optical cavity which will be installed in a vacuum chamber and locked to a Frequency comb. 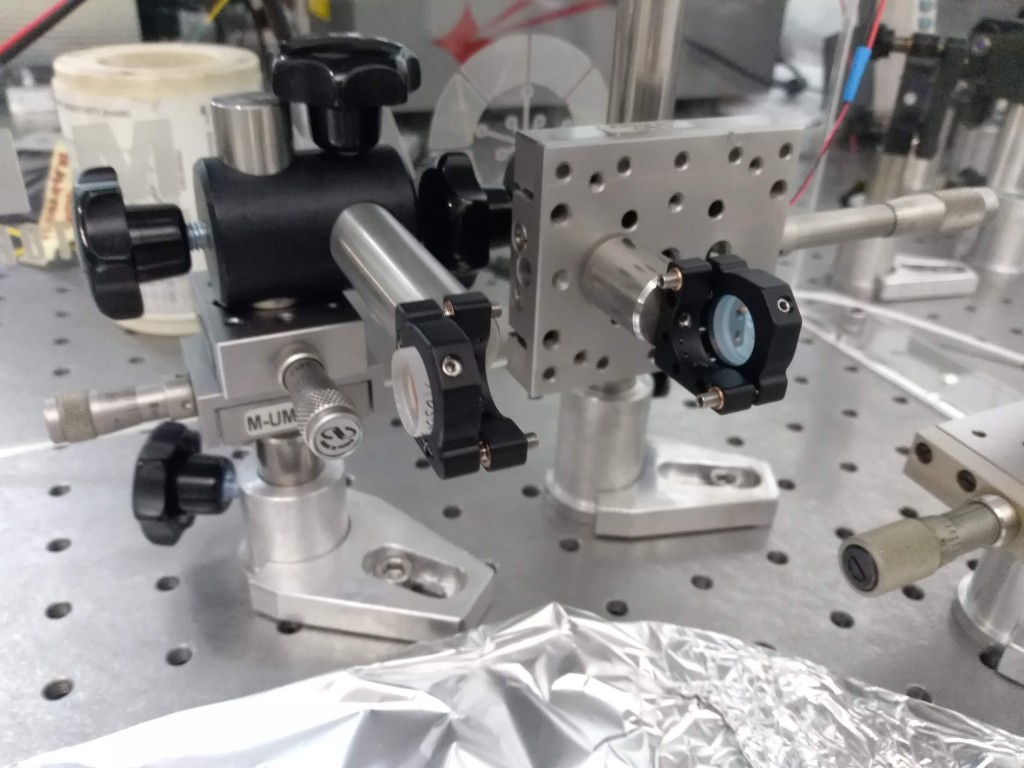 October 2017. Danijel Buhin participated in the Les Houches predoc school on Cold atoms and quantum transport in France. He had a poster presentation about Frequency comb optomechanics in cold atoms. 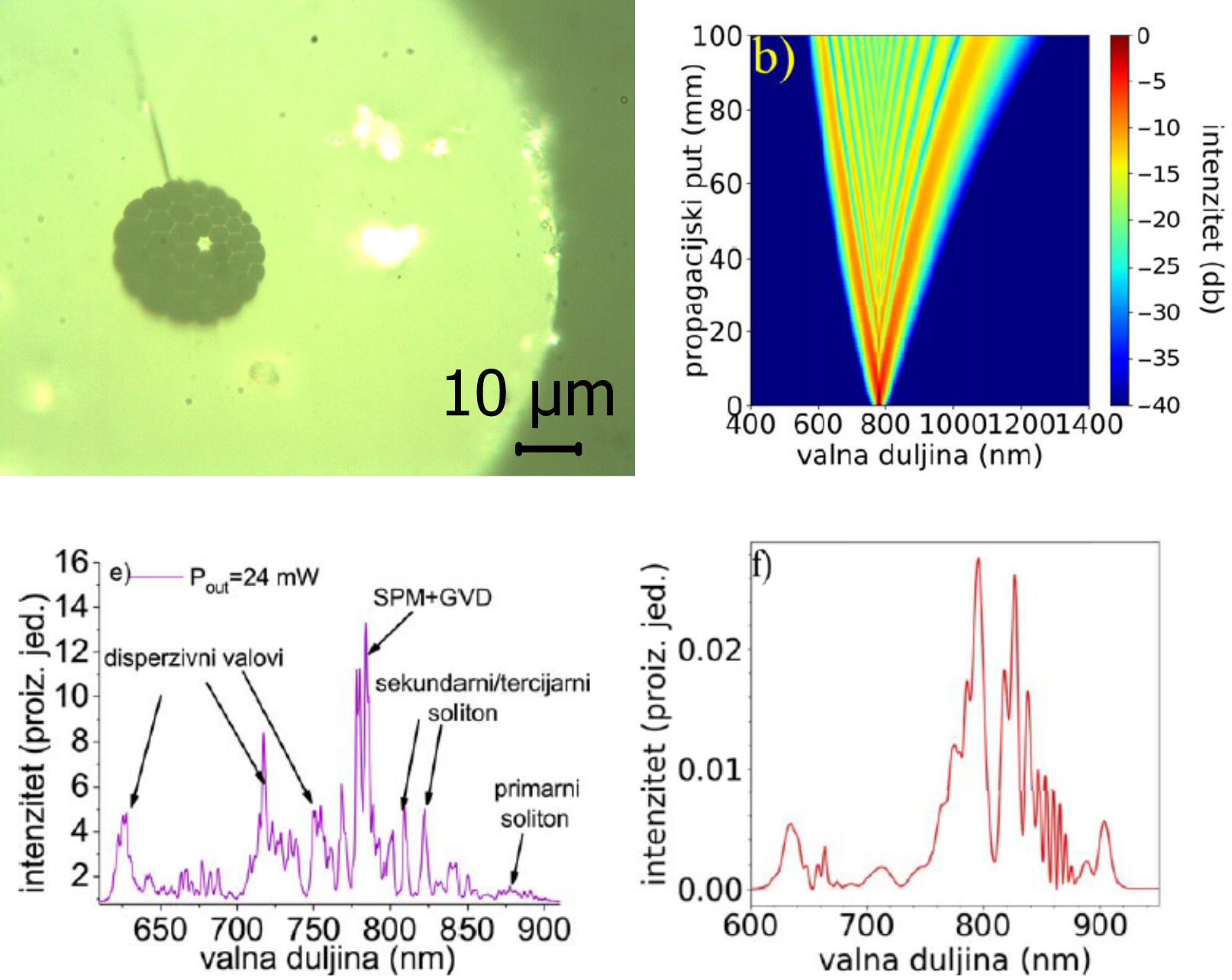 September, 2017. Postdoc researcher Ivor Krešić participated in the conference PHOTONICA 2017 held in Belgrade, Serbia with a poster about frequency comb laser cooling of 87Rb atoms below Doppler limit. Ivor also had a Progress report talk about pattern formation in cold atoms, which featured work done during his PhD studies at Strathclyde University in Glasgow, Scotland.

July 2017. Danijel Buhin defended his Master’s thesis “Femtosecond laser optomechanics in cold atoms“.
In the left figure there is  presented displacement of cold rubidium atoms cloud center of mass due to force from one femtosecond laser beam. At the top right figure there is presented a) train of femtosecond pulses in time domain and b) their Fourier transform – Frequency comb in frequency domain. A scan of force vs. detuning is presented on the right figure. These measurements represent femtosecond spectroscopy of 87Rb cloud. 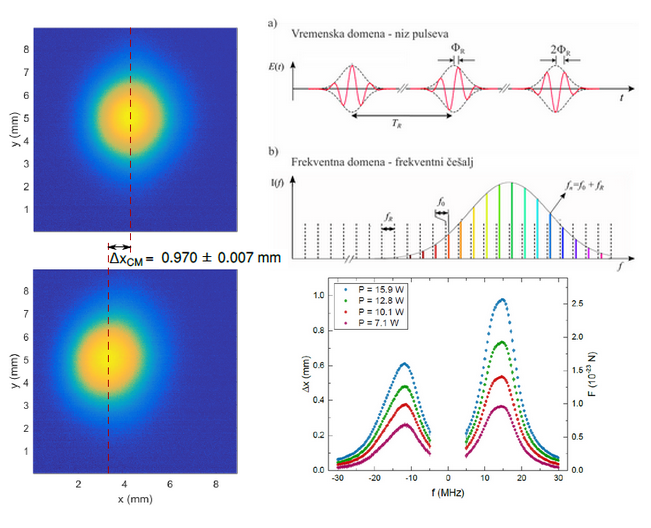 July 2017. A. Cipriš and D. Kovačić participated in New Frontiers in Optical Trapping and Optical Manipulation summer school at Barcelona, Spain, where they presented their posters. 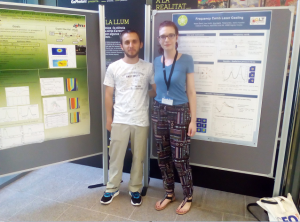 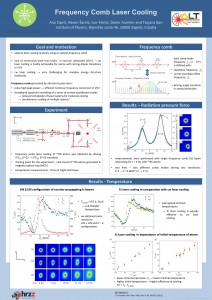 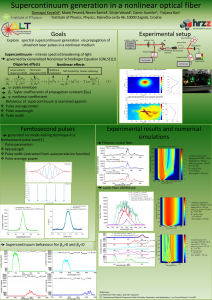 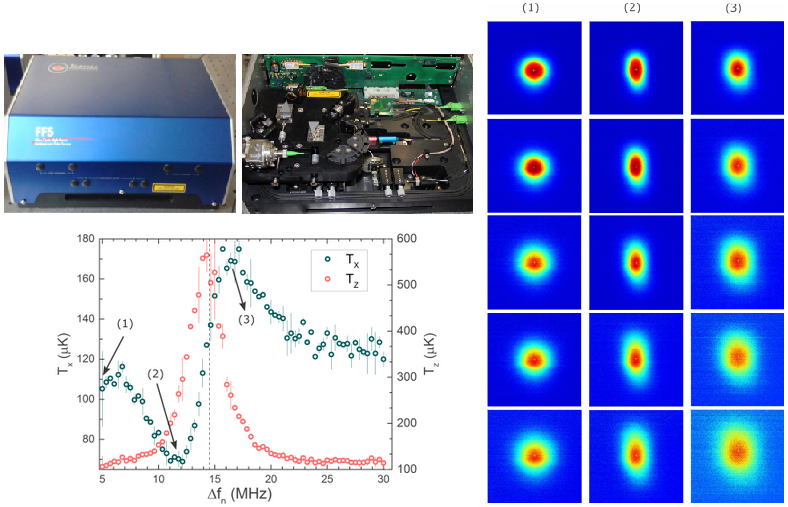 May 2017. New article has been published: “Synthetic Lorentz force in an expanding cold atomic gas“.

In figure left is scheme for obtaining the synthetic Lorentz force and the resulting force patterns in velocity space.
Measurements (b,e,h) and calculation (c,f,i) of atom density distributions after τ = 4 ms of expansion time for three experimental configurations (a,d,g) are presented on right figure. 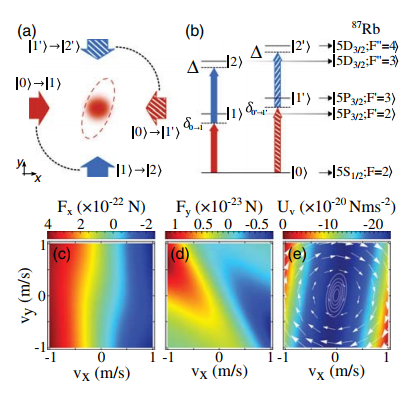 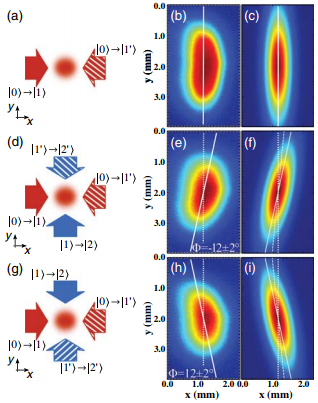 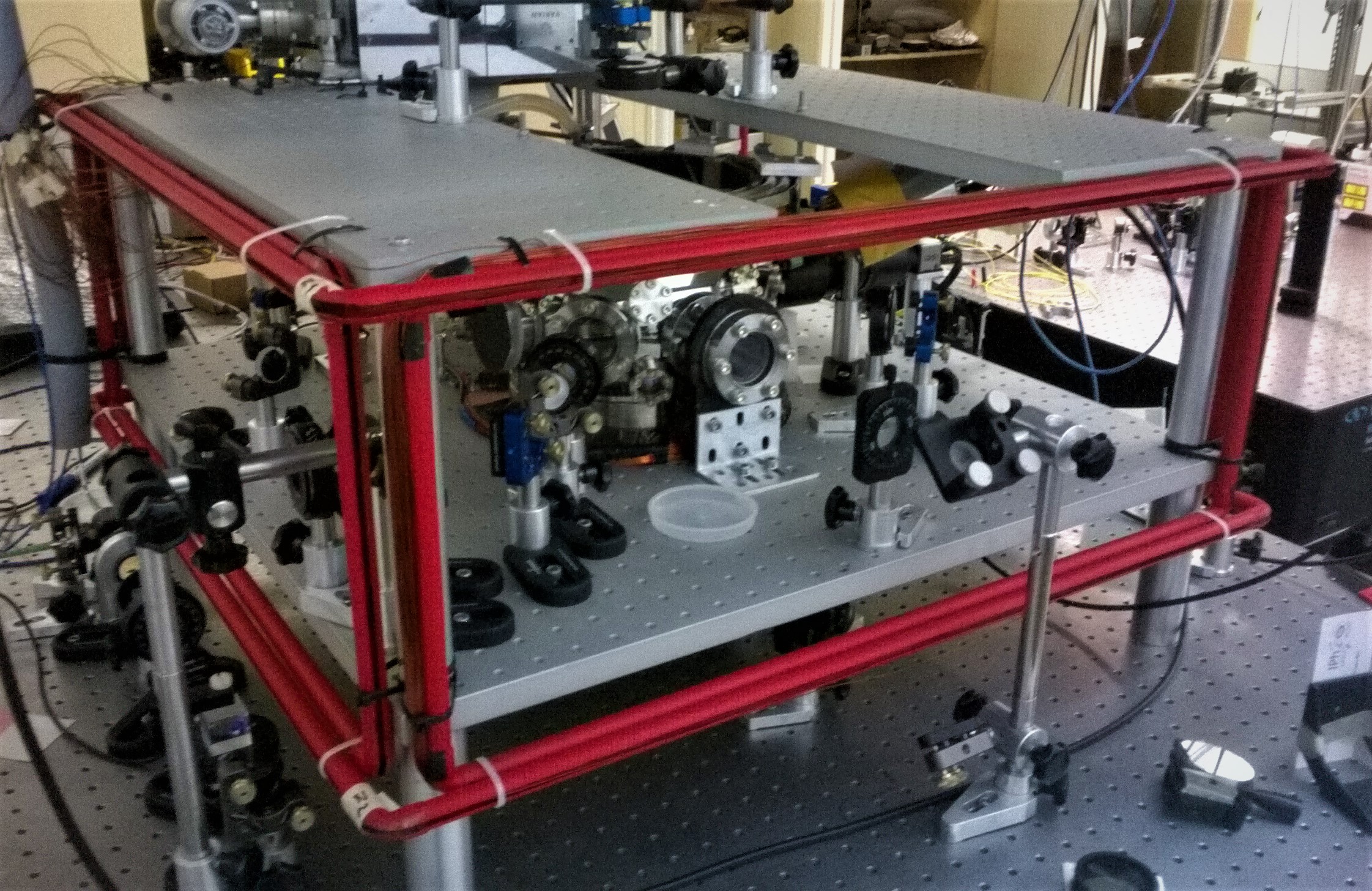 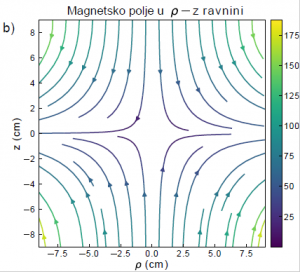 July 2016. Open PhD position announced. The PhD position will be funded by a Croatian Science Foundation, Career development of young researchers program. PhD student will work on the MeCombO project, with the goal to study  the mechanical action on cold rubidium atoms due to excitation by femtosecond pulses in various experimental geometries.

March 2016. New chamber and locked FC are ready for the force measurement. 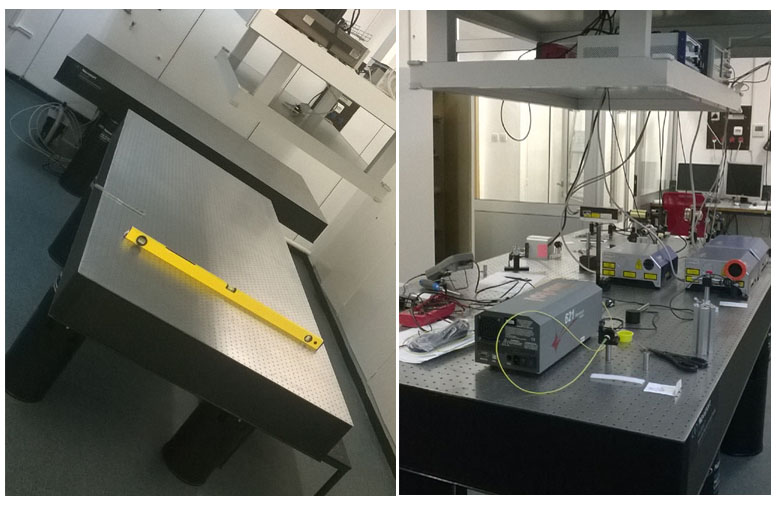 A new project grant – Frequency-Comb-induced OptoMechanics (MeCombO) – funded by the Croatian Science Foundation (hrzz) has been awarded. The project starts on 1st Septembe

Project summary:
The aim of the project is to explore novel phenomena that arise when the mechanical action on cold atoms is induced by frequency comb (FC) excitation, including entanglement and decoherence, near-resonance dipole trap, and frequency-comb-induced cavity cooling.

Inducing mechanical action on atoms by continuous wave (cw) laser excitation has been a central topic in atomic physics for decades. Laser cooling and trapping of atoms, a technique that enables production of dense (ultra)cold atomic samples, was made available by employing radiation pressure force. Furthermore, atomic self-organization and collective cavity cooling have been demonstrated in cavity-optomechanical systems with cold atomic ensembles. Yet, in contrast to the rich and fruitful field of cw-laser-induced optomechanics, the investigations of mechanical action on atoms due to interaction with trains of ultrashort laser pulses (i.e. frequency combs) are scarce in literature. Meanwhile, recent results made in our group have indicated that in a specific excitation geometry an entirely new type of FC-atom interaction emerges that calls out for further experimental and theoretical investigation. 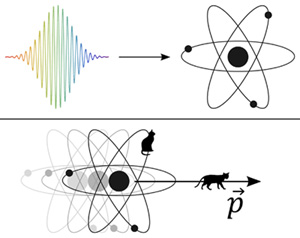 The measurements of the radiative force of a femtosecond laser on a cold atomic cloud in an out-of-phase counterpropagating configuration are intriguing and challenge previous models. A potential reason for the discrepancy is that the boundary between quantum and classical worlds is not sharp but rather something like many shades of grey. The coupling of internal (quantum) and center-of-mass (classical) degrees of freedom, which is ubiquitous in any model calculating the laser force in atomic systems, is shown to be nontrivial here. It could depend on how quantum entanglement between internal and center-of-mass coordinates decays, which should be taken into account when we transfer information from the quantum to the classical world.

Quite surprisingly, we point out that a very simple experimental setup could potentially probe the boundary between quantum and classical, and explore fundamental phenomena such as decoherence.