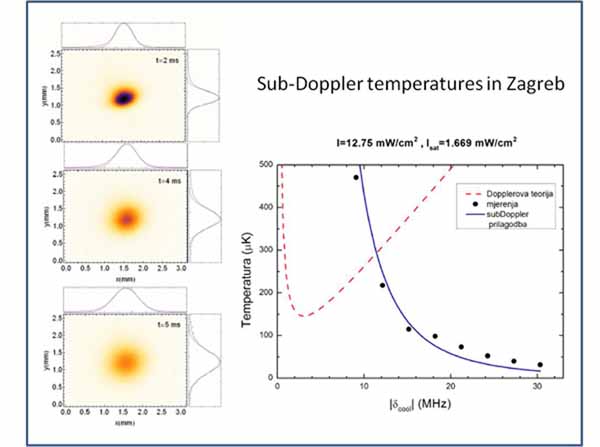 Temperature of the atoms in the cloud is measured using the time of flight technique (TOF). Temperature dependence on the intensity and frequency of the cooling laser is observed. The measured values showed a good agreement with the theoretical model for sub-Doppler cooling. The lowest temperature we measured is T=21.95 μK.

We study the radiation pressure force exerted on cold 87Rb atoms captured in a magneto-optical trap (MOT) due to resonant excitation of atoms into the non-cooling 5P1/2(Fe = 2) hyperfine level. We measure the fractional excited population for different MOT parameters such as cooling laser detuning and power, and empirically test the applicability of the Optical Bloch Equations for describing cold atoms in the MOT. We use the effective saturation intensity parameter which enables simple calculation of the fractional excited state population in a multi-level system using a two-level model, and apply it for the radiative force modeling. This approach provides a valuable tool for optical manipulation experiments.

Damped harmonic oscillation of the cloud center of mass (CM): 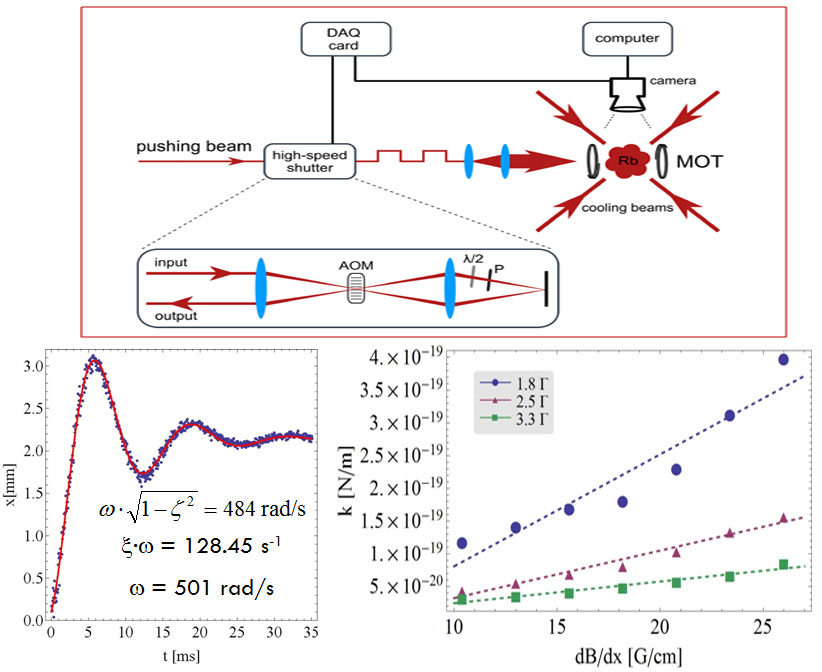 The trap spring constant κ is obtained from a transient oscillation method. We have measured the trajectory of the atomic cloud after the additional external force is switched off, and the cloud returns to the original MOT center. The atomic motion in MOT is given by a damped harmonic oscillator model. The trap frequencies and damping coefficients for different MOT parameters are obtained from fitting procedure.

87Rb atoms are  cooled and trapped in a vapor-loaded magneto-optical trap (MOT). The trap is set up in the standard σ+σ− retro-reflected configuration, with beam diameters of 2 cm. Cooling and repumper lasers are external cavity diode lasers (ECDL, Toptica DL100 laser systems). The cooling laser is typically 2−3 linewidths red-detuned from the 87Rb D2 Fg = 2 → Fe = 3 hyperfine transition. The repumper laser is in resonance with the 87Rb D2 Fg = 1 → Fe = 2 hyperfine transition, thus keeping most of the population in the 5S1/2(Fg = 2) ground level. The quadrupole magnetic field is provided by a pair of anti-Helmholtz coils. The number of atoms in the trap is deduced by measuring the cloud fluorescence with a calibrated photodiode. The cloud density distribution is measured by imaging the cloud fluorescence onto a CCD chip.